When it comes to playing rock & roll, The Jacks simply don’t have a choice. “It’s what we listen to, it’s what we play,” bassist Scott Stone says, “and when you stick four guys like us in a garage with instruments, it’s just the kind of music we are going to make.”

“We’re trying to push the boundaries of the rock & roll genre by incorporating modern elements, but still keeping the core structure of a four-piece band,” Stanback says. “We are creating a sound that feels familiar, but is completely ours.”

The way they see it, playing rock at a time when pop and hip-hop are dominating the charts is an act of defiance. If any band is poised to help bring authenticity back to rock & roll, it’s The Jacks. The quartet has been making a steady ascent since forming in Los Angeles in the summer of 2016, selling out gigs at legendary hometown venues like the Troubadour, Roxy and Viper Room, and playing big festivals like Aftershock and Sonic Temple.

The Jacks got their name from a fan telling them early on that they were “jacks of all trades” when it came to playing different styles and blending their songs with those of their idols. They often performed four-hour shows covering songs from almost every era to make money to pay for their early recordings. Each of their tracks shows off a different side of the ensemble. From the hard-edged rockers to the more melodic numbers, you can hear how the band members have poured their hearts into each of the songs.

After relentless gigging and self-releasing singles, the band entered a local radio station’s battle-of-the-bands competition in 2017 – and won a recording contract. They passed on the offer and continued to tour and work on their songs waiting for the right opportunity. They found that opportunity when EDGEOUT Records signed them and put them in the studio with producer Matt Wallace (Maroon 5, Faith No More). The group released their debut self-titled EP with EDGEOUT / UME after working with Wallace at Los Angeles’ famed Sunset Sound Recorders.

As Wallace declares, “The Jacks deliver lean, rugged rock & roll with songs that feel like instant classics that make you want to move, with earworm hooks and melodies that will have you kinda upset when you find yourself unintentionally and inappropriately humming their songs at work, in church, in court, or at wakes. If the Strokes, Cage the Elephant, and the Stones had an equally talented, but more handsome baby, it would be named The Jacks!”

While their self-titled debut EP and first single, “Walk Away,” racked up almost three million streams and the release of a reimagined version of the holiday classic, “In The Bleak Midwinter,” cleared almost a million streams, the band spent much of the past year on the road touring including a West Coast run with The Shelters, and a nationwide tour supporting “American Idol” finalist Wade Cota. They also performed at the NFL pre-Super Bowl and NHL Winter Classic events, and “Walk Away” was chosen to be heard during the 2019 Stanley Cup playoff games’ broadcasts, highlight reels, and commercial bumpers.In spite of their rigorous touring The Jacks somehow made time to spend time in the studio creating new music.

For The Jacks’ second EP REMEMBER YOU, multiple GRAMMY® Award-winning producer Joe Chiccarelli (The Raconteurs, Weezer, Frank Zappa) was at the helm. The band once again delivers original songs infused with their passion for guitar-driven, groove-propulsive rock ‘n’ roll that is sung with sassy grit (“Threw It All Away”), heartfelt angst (“We Were Only Young”) and emotion (“Olivia”), or soaring anticipation (“The Only One”). 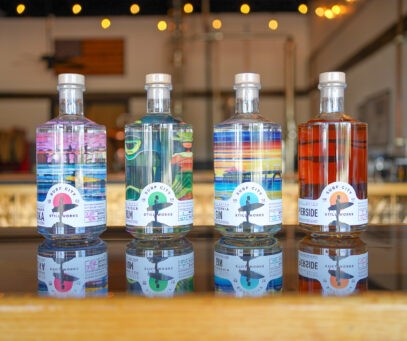 Where are you from?

We’re all from the Orange County area. Jonny is from Irvine while Josh, Scott, and Tom are all from Corona del Mar.

What first inspired you all to come together and be creative? What inspires you guys to be creative today?

It was mostly growing up and listening to the artists that we are still inspired by today (The Who, Oasis, the Beatles, the Rolling Stones). Tom and I (Scott) went to a Who concert in 8th grade and the next day decided to form a band. Of course back then it was just playing covers in my garage for fun but once we linked with Jonny and Josh at the end of college, we realized our potential and what we wanted to be. I think our biggest drive for creating music is our passion for music. Especially now during quarantine, all live shows are gone so the only thing we can focus on is writing and creating. Also, we are always wanting to leave a lasting legacy and to help push the genre forward.

How has your music changed over time?

When we were first writing, we mostly focused on how it would work at a live show. We kept it very simple as if it were just hearing a good recording of 4 guys in a room. Now, we have learned so much more about how to really use the studio as an instrument. Covid has been a very difficult time for so many people and for the industry, however we were able to use this time to completely rethink the band we want to be. At our core, we are still rock n roll but now using a lot more modern techniques to create a more unique sound that can stand out in the current times we are living in. It has been a long ride for us but now I can say confidently we have reached a sound that we are truly proud of and cannot wait to share with the world.

What is one thing you cannot live without?

Obviously music… but that is too easy of an answer. I’d have to say coffee as that has been our lifeblood in the studio these past 6 months. After that we have all become addicted to running and pushing each other to see how far we can go.

What makes you feel connected to Orange County?

Orange County will always be home to us. It is where we all grew up and I think it is apparent in our personalities and somewhat in our music. We cut our teeth playing all the venues and dive bars we could throughout Orange County. Some of our favorite memories in the band will be the 4 hour cover shows we would do at the Blue Beet.

What is “success” to you?

Being able to be truly proud of the product you have made. If you are able to see your vision through from beginning to end and knowing that product (whatever it may be) is exactly how you want it, you are successful.